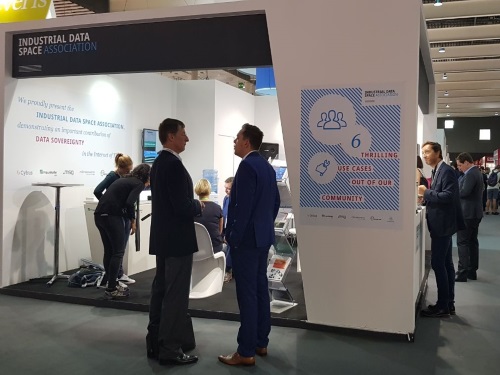 Companies like Microsoft, Google, Intel, Telekom and Deloitte as exhibitors, more than 250 speakers from industry, business and research and about 13,000 visitors from 114 different countries – the IoT Solutions World Congress in Barcelona was a great success for the organisers. The Industrial Data Space Association can also draw a thoroughly positive conclusion after its premiere as an exhibitor at one of the leading IoT exhibitions in Europe. “The number of visitors at our booth and the feedback we got about our idea and the previous successes of Industrial Data Space was fantastic”, Lars Nagel, Managing Director of the Industrial Data Space Association, looks back at the exhibition in Spain with satisfaction.

At their 30 square metre booth, the User Association demonstrated the cornerstones that have already been achieved together with the member companies Cybus, Fraunhofer ISST, MSG Group and Nicos in a vivid and practice-oriented way. One exhibit about the reference use case Logistics, for example, showed how applying Industrial Data Space can work in logistics and how it is able to optimise processes sustainably – for example in the supply chain.

With a constellation of 1,500 LED lamps, Cybus impressively showcased how data can be distributed in real time between manufacturing and cloud with Cybus Connectware. The MSG Group presented their myData platform, a data broker for data-centred business models. The fact that Industrial Data Space can be a solution for sovereign data exchange for companies worldwide, was underlined by the IDSA member thyssenkrupp at IoT with a film specifically produced for the exhibition: “The solution is Industrial Data Space”.
There was another practical example of a very successful cooperation at the IoT Solutions World Congress: Directly next to the Industrial Data Space Association’s booth, the FIWARE Foundation also had their stand. They would like to deploy the first open source implementation of Industrial Data Space.

Whereas everything was running smoothly inside the exhibition halls, the current political events in Spain affected arrivals and departures. Strikes and demonstrations subsequent to the Catalan independence referendum of 1 October 2017 partly stopped the traffic and public transport. Transport with busses, underground and cabs was only guaranteed for one hour before and one hour after the beginning of the exhibition. Participants who wanted to be more flexible needed to be more imaginative: Uwe Brettner, Managing Director of nicos AG, and Jörg Langkau, Managing Director of nicos Research & Development GmbH, quickly decided to rent bikes as the best way to get to the exhibition halls.

Catena-X: Network for Cross-Company Data Exchange in the Automotive Industry Relies on IDS